This site uses third-party website tracking technologies to provide and continually improve our services, and to display advertisements according to users' interests. I agree and may revoke or change my consent at any time with effect for the future.

Contactless care In THE RED

The provision of a secure and clean environment for colleagues and guests has top priority for us.It is important that our guests always feel  safe with us. We commit ourselves to the highest standards of cleanliness and contactless service.

The check-in is completely contactless.You will receive your access codes for your apartment on the day of your arrival, as soon as it is cleaned and disinfected.

Our cleaned and disinfected tablets are available for you inside the apartment as a digital concierge.

After departure we will send you the invoice automatically by email - please leave your email address on the registration form provided in the apartment.

From Shipping harbour to Media harbour

Although the Düsseldorf shipping harbour was in existence since the 1500s (as did its crest with an anchor symbol), it did not see much shipping traffic.

The Rhine and its harbour came only into real use in 1866 when the harbour warehouse was built.

It all came to fruition in 1880 when an architect from Berlin by the name of Mr. Plock was consigned to further develop the harbour.

The Rhine harbour Düsseldorf was officially opened in 1896 and covered an area of 80 hectares.

Soon after, the burgeoning trade along the Rhine created a need for customs support and this ultimately gave birth to the Düsseldorf Royal Customs House in 1901-1902.

We know this fine building today as THE RED – Living Suites by The Rhine.

The Second World War in the 1940s saw the destruction of the harbour and its infrastructure which unfortunately included the Royal Customs House.

This building was re-built thereafter, but not to its original splendour. 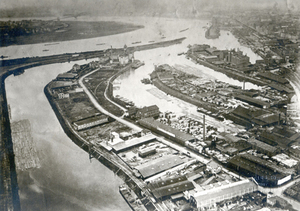 Circa 1905 – A dramatic photograph taken from an airship. This shows the northern part of Düsseldorf overlooking the harbour. 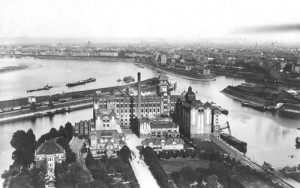 Circa 1930 – A photograph of the fine city of Düsseldorf, showcasing the Rhine Harbour.

To meet shipping demands in the following years, the harbour grew in size.

There were other changes too, for example, the harbour was originally located at the southerly border of Düsseldorf, whereas today it belongs to the downtown area.

The meaning of the harbour changed starting from the '70s. 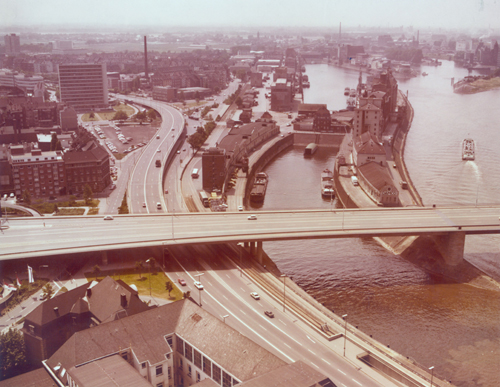 Circa 1970 -The view from the top of the Mannesmann Tower which oversees the Berger Hafen (Berger Harbour).

The Rheinkniebrücke (bridge), which was opened in 1969, is in the foreground with the Zollhafen (Customs Harbour) featured here.

The parliament’s president building may be seen here at the bottom-left corner.

In 1974, the local government embarked on an ambitious program to change the harbour area into a city area. The first few steps included the construction of the TV Tower and the parliament building – which were built in the immediate vicinity of the iconic Royal Customs House Building.

Before long, the Royal Customs House Building was given the status of being a historically conserved building in 1988.

It is recognised as one of Düsseldorf ‘s more significant and iconic buildings due to its historic value in architecture and commerce.

In 2010 the building was bought by its current owner. Prior to this, it was unused for a few years and was in need of rejuvenation.

Much care was taken to restore the building back to its former grandeur. While keeping true to its historic beauty, contemporary and modern touches were added.

All these were carefully and lovingly done and today we can enjoy this building once again in all its splendour. 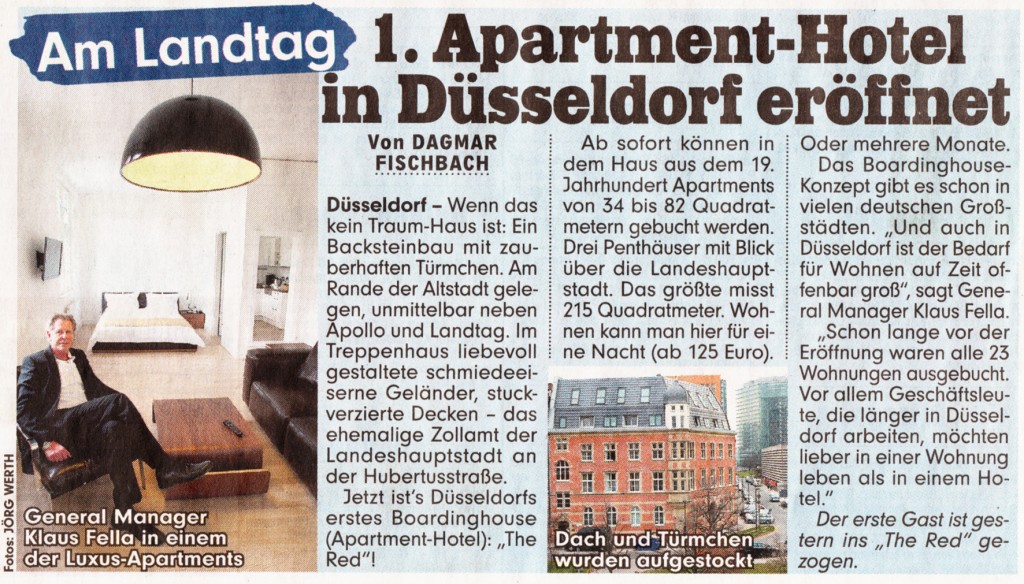 In March 2013 THE RED welcomed its first guest. 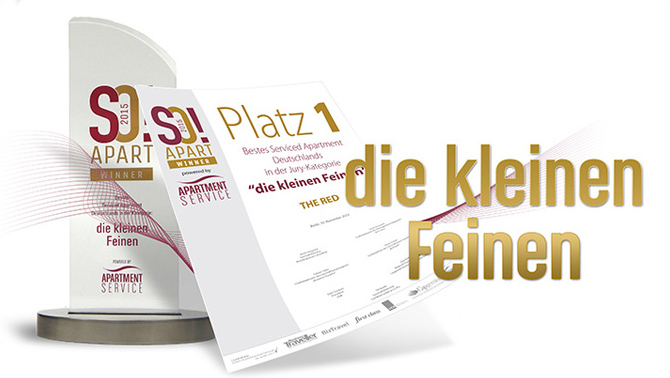 In November of the same year THE RED won the 1st place in the category “The Little Finest” at the So!Apart Award in Hamburg. 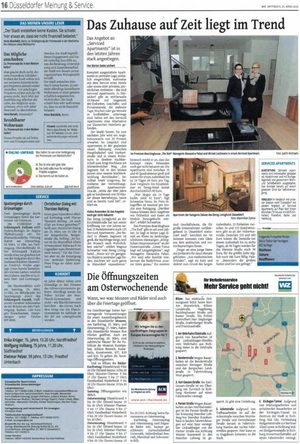 In March 2014 THE RED turned 1 year old and had already hosted many guests. 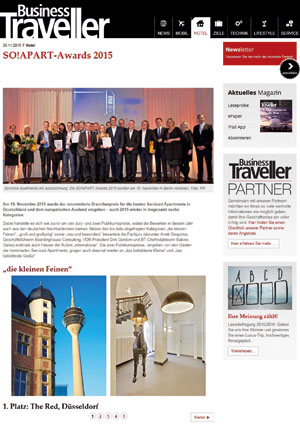 In 2015 the THE RED has been awarded the 1st place in the category “The Little Finest” once again at the So!Apart Award in Berlin.

At the beginning of 2017 the interior of the apartments was renovated and modernized.

At the end of 2017 THE RED won the Consumer Award for Serviced Apartments in the category “the most popular little one”.